After the Halving: Bitcoin Inching Towards a $10K Breach Despite Volatility 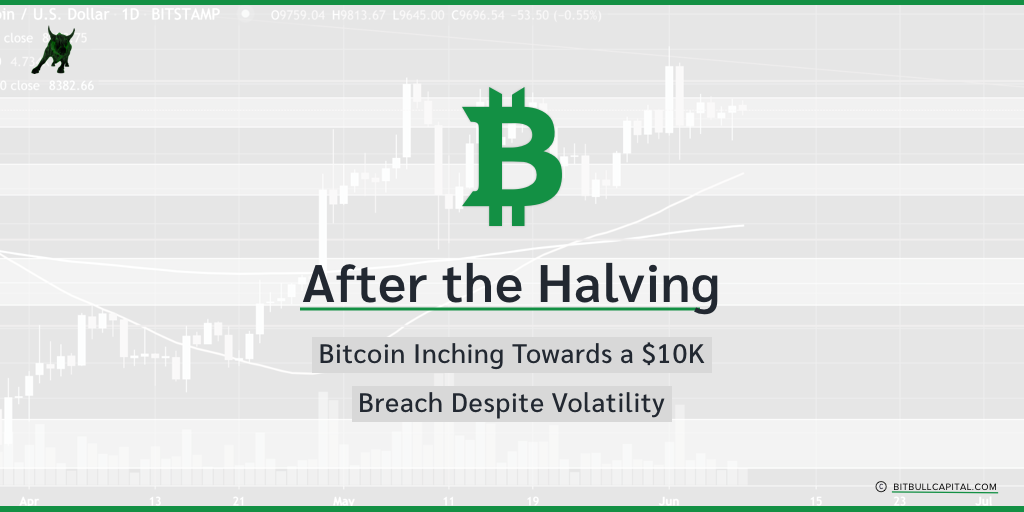 Bitcoin, the largest digital currency by market cap, underwent its third block reward halving last month, on May 11, 2020, in what was a much-anticipated fundamental development. From lows of around $8,200 on halving day, Bitcoin rallied over 25% to touch $10,400 on June 1 and is currently trading at $9,700, reflecting an overall positive sentiment.

In this article, we discuss why the halving is a bullish development and what can be expected from Bitcoin moving forward.

Halving as a bullish fundamental development

Even though the reward halving directly impacts Bitcoin miners, it indirectly affects the rate of new Bitcoins being created and their entry into the market.

This reduction, from 1,800 daily Bitcoins prior to the halving, means the supply is reduced, which puts pressure on the price as demand stays the same or increases moving forward. This is fundamentally why the halving is treated as a bullish development.

Scarcity aside, another factor believed to drive up prices post-halving is the lack of selling pressure which came from inefficient miners, forced to sell all of their mined BTC on the market to cover costs. With increasing competition and lower profitability, it is believed these miners will go out of business, making way for more efficient miners, who don’t necessarily sell their entire BTC earnings every month.

During our numerous commentaries over the last few months, we highlighted $8,200, $8,700, $9,000 and $9,500 as key price levels, and they continue to remain active as Bitcoin swings between highs and lows in attempts to tackle the strong resistance at $10,000.

In the coming weeks, Bitcoin is likely to test the $10,000 resistance again, as indicators are not overheated and the moving averages have been creeping upward, raising the floor for any possible price drops.

With the global economy reeling from the effects of COVID-19 and governments rushing to provide stimulus packages and printing fiat currencies to alleviate conditions, Bitcoin remains more relevant than ever.

Unlike fiat currencies, Bitcoin is not inflationary in nature and does not devalue with time. In fact, with the reduction in supply, discussed as part of the halving protocol mentioned above, Bitcoins appreciate if anything, as supply decreases and demand increases.

However, regulatory pressures continue to act as hurdles, especially as non-state-issued currencies, such as Libra, struggle to find support. In Libra’s case, Facebook has decided to play ball with the regulators, and while some level of centralization may be the key to getting such an ambitious project off the ground, it does raise more questions, particularly around nature and spirit of cryptocurrencies like Bitcoin, which are designed to be decentralized.