Bitcoin Back in Sync with Gold After More than a Month of Consolidation – New 2020 Highs on the Horizon? 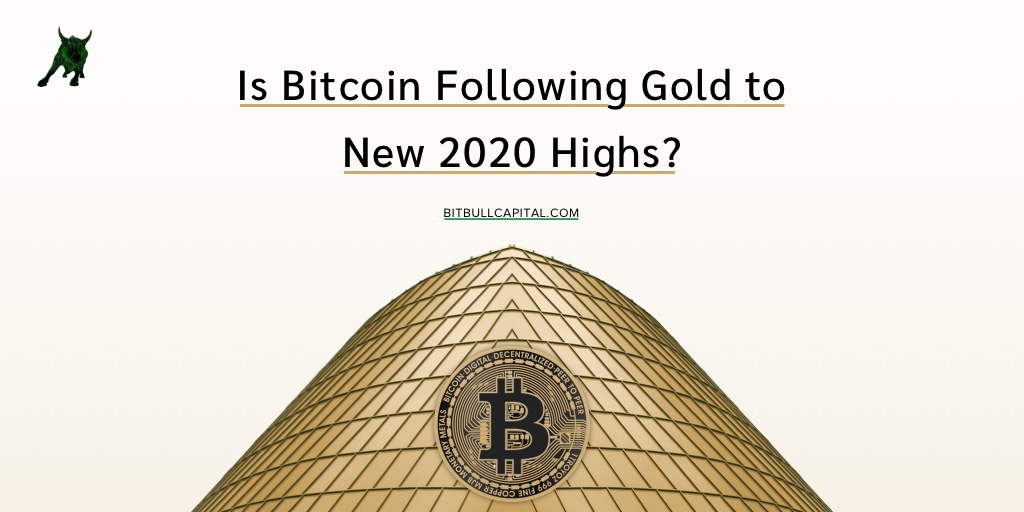 After a prolonged consolidation period spanning most of June and July, Bitcoin sprung into action and crossed the critical $10,000 level earlier on July 26, before a mild correction, followed by another surge that took it near $10,500, one of the key resistance levels to watch.

The move comes at a time when altcoins had been under the spotlight once again, especially with the whole DeFi mania pushing certain tokens higher and highlighting the Ethereum network’s potential as a unique value offering in a space rife with transactional currencies.

Looking at returns over the past week, Bitcoin had posted a decent gain of more than 8%, but ETH had beat all large caps to post over 30% – going from under $240 to almost $320. ADA also performed better than most with a gain of 19%+ at the heels of the Shelley launch announcement.

Litecoin, Bitcoin Cash, BitcoinSV and XRP are other major large caps that performed well over the week. While Bitcoin’s dominance fell slightly during the week, today’s rally is seeing the number go up, indicating traders and investors are selling alts to buy Bitcoin in anticipation of a bigger price surge.

The question however is, whether this Bitcoin rally has a shot at changing the market sentiment for the long-term or not.

While Bitcoin had spent most of June and July following U.S equities in the wake of COVID19 and the resulting stimulus packages, the recent rally sees the leading digital currency follow gold and silver, both of which are at recent highs with gold trading around $1,900/oz and silver around $24.

This trend makes sense as new stimulus packages seem to be on the horizon and additional money printing is raising concerns around devaluation of wealth – driving people to seek safe-haven assets.

Even though Bitcoin is not as popular or prevalent as gold or even silver in terms of safe-haven status, it does present an alternative investment opportunity for investors seeking value stores in preparation for the future.

Meanwhile, on the technical front, Bitcoin’s rally was to be expected as June and July saw record lows in terms of volatility and the Bollinger Bands indicator narrowed, hinting towards an impending break upward or down.

Unlike last week, Bitcoin is leading the rally today and is currently up more than 4% while other large caps are either negative or trailing it. This indicates market participants fomo-ing into new positions and selling alt coins to join the Bitcoin bandwagon. Looking at the charts, volumes also reflect increasing participation, which bodes well for this rally.

However, the price action is now significantly overheated and correction is to be expected, especially in order to test and cement the support at $10,000. If the volumes continue to pour in and Bitcoin crosses $10,500 then the drive to $11,000 will be relatively smoother. A breakdown of $10,000, on the other hand, may result in prices going as low as $9,000 again.

For now, market participants may also wait for the FED meeting on Wednesday and assess future positions based on the body’s policy announcements. If interest rates remain unchanged, new stimulus bills are likely to drive safe-haven assets even higher, and by the looks of it, Bitcoin seems to be in a good position to benefit from these developments.