Bitcoin’s price movements continue to represent overall market sentiment and direction. Over the last two months, BitBull Capital’s analysis indicated that BTC prices were likely to remain depressed and any relief would be temporary. In the near term, we believe Bitcoin will trade between $7500-780. But, a break down into the $6K range is more likely than a break upward, barring bullish news.

Since the late September drop, from $10,000 to $7,750, which we identified as a key support range, we’ve had a few anticipated developments, including an ETF decision and Zuckerberg’s congressional hearing, but it was news from China which gave the market an unexpected bump, taking Bitcoin from just under $7,400 to over $10,300.

However, the surge was purely speculation-driven, as China appears to be bullish on blockchain technology and not Bitcoin in particular. At the time, we advised caution and believed the price would return to the previous support, around $8,600, where the 50-day moving average lay. 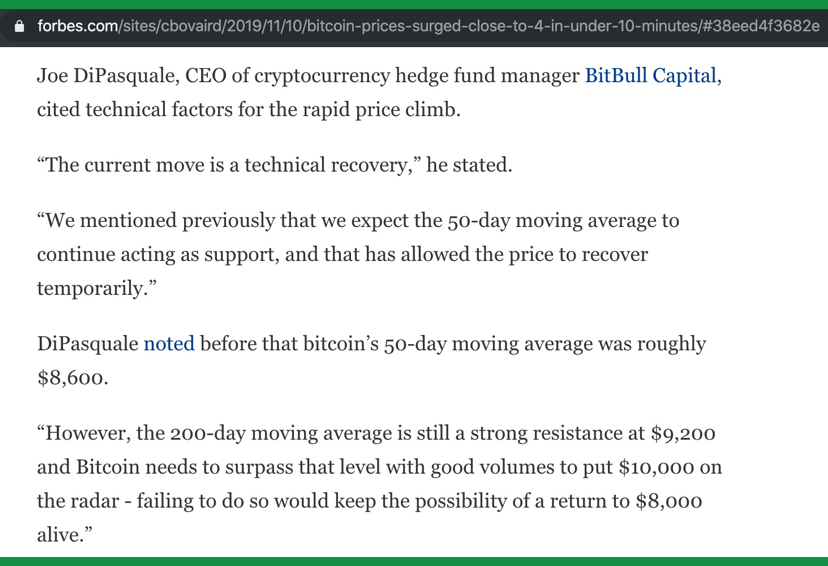 While we expected the 50-day moving average to support the price for a bit, the lackluster market sentiment and disappointing volumes indicated further downside was to come, and we reiterated our belief that a re-test of $8,000 was not out of the picture. 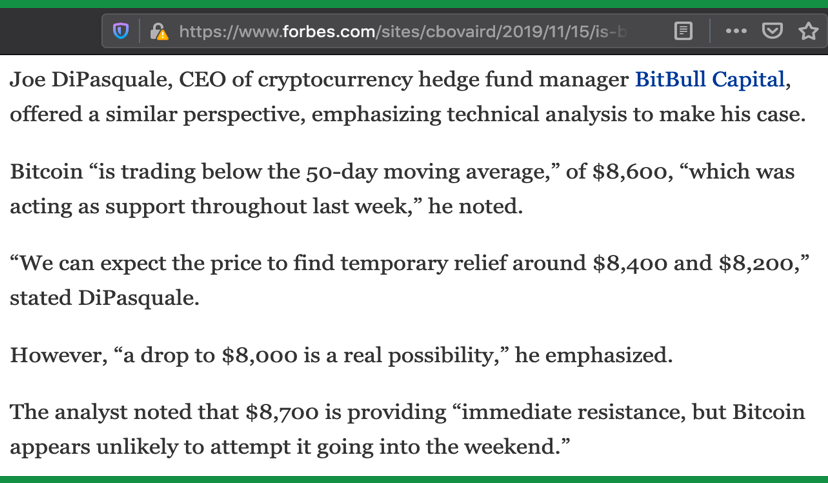 Not only did Bitcoin retest $8,000, but it also fell to our originally highlighted support zone, around $7,500 (Bitcoin traded as low as $7,404 today). From here on, we expect the price to recover temporarily since BTC is oversold, but $8,000 has become a ceiling, for now, followed by $8,500 like a bigger resistance, where price meets the 50-day moving average. 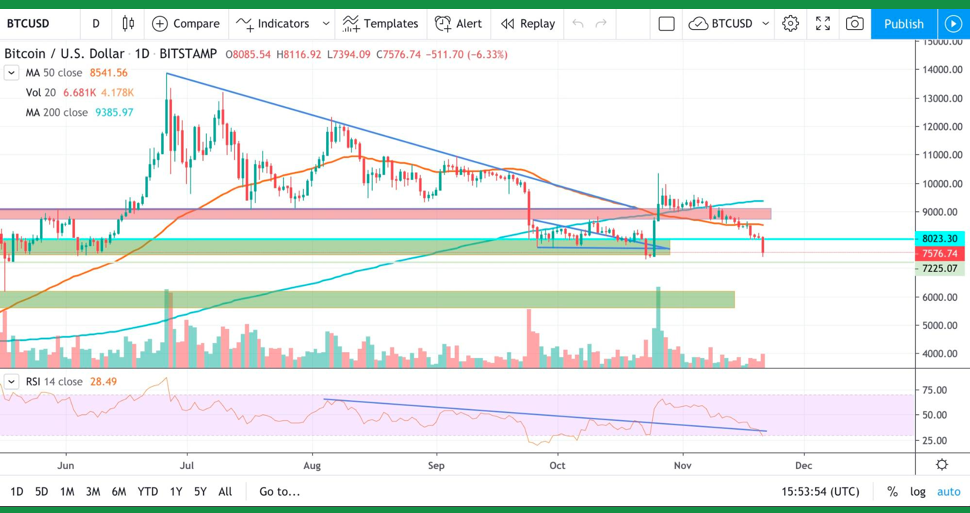 In addition, sentiment has been low, especially in light of this week’s crackdown on crypto by China. On Nov 18th, the official accounts of exchange operator Binance and blockchain platform Tron were suspended by Twitter-like Weibo. Then, on Nov 21, Chinese authorities raided the Binance offices. This added more downward pressure on Bitcoin’s price, which was already in a downtrend. Given these developments, it is evident that China’s support for blockchain cannot be confused with support for crypto or Bitcoin.

For now, Bitcoin is likely to trade sideways, within the identified support and resistance zones. If the current support at $7,500 is breached conclusively, the next stop would be $6,000. The maximum upside, meanwhile, is limited to $9,500. A break down is more likely than a break upward, however, due to low volumes, repeated new lows, and low sentiment.

While in the short-term, our aim is to leverage Bitcoin’s volatility for maximum returns, in the long term, we remain bullish on Bitcoin and selected altcoins and believe the market is likely to exhibit more volatility as we move closer to next year’s BTC halving.