Bitcoin Ends April up 35% Ahead of Supply Tightening 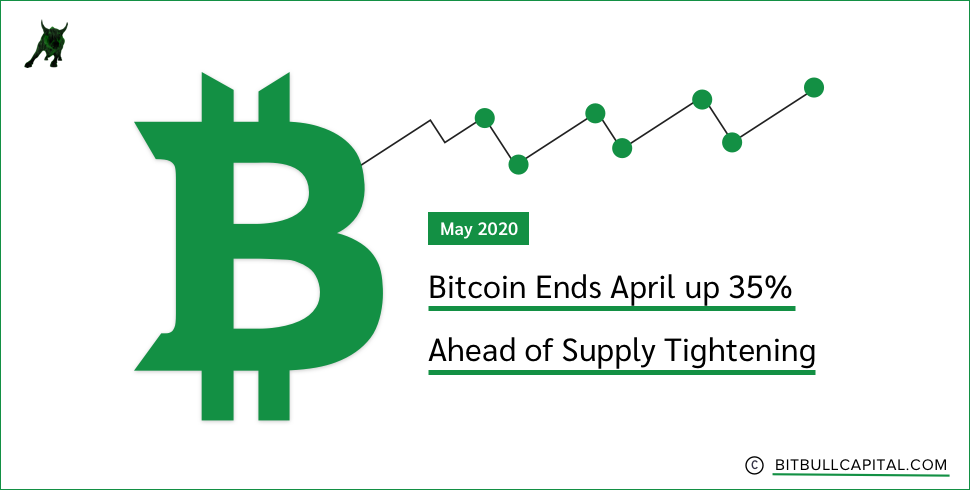 Bitcoin’s proponents have long anticipated the upcoming block reward halving, an event that halves the rate at which new Bitcoins can be generated. This is an automated process to curb Bitcoin supply and lead to scarcity, as opposed to fiat currencies like the US Dollar, of which billions more were printed many times in the last decade, including in the last month.

Many alternative crypto assets are performing even better than Bitcoin in April; Ethereum, the second-largest crypto asset, was up 55% in April.

*Disclaimers: Comparison through the end of April. All #s are approximate. Please note that Bitcoin is a single asset, while our funds invest in multiple assets. Crypto Index refers to Cryptocurrency Index 30 (CCI30). CCI30 data obtained from cci30.com.

Until now, Bitcoin has undergone two halvings, one in November 2012 and the other in July 2016. After both these instances, Bitcoin’s price skyrocketed to new highs. This month, the digital currency is scheduled for its third halving and market proponents have been awaiting the development with bullish sentiments.

April’s numbers reflect this positivity, especially after March’s corona-driven dip, as Bitcoin rose from just under $6,500 to end the month at almost $8,700, posting a gain of over 34%. These figures came amidst a global economic crisis that saw equities taking pressure and oil prices crashing to historic lows due to plummeting demand and lack of storage facilities.

BTC/USD Historical Prices as per data from CoinMarketCap.com

As per the table above, Bitcoin’s year-to-date performance has also been encouraging despite the March slide, and May figures reflect further upside potential at least until the halving is completed.

On the flip side, a short-term drop in price following the halving is expected. The crypto market typically ‘sells the news’, and the same was witnessed in the last halving, which saw a slump in prices for about 8 months.

It is interesting to note that the price appreciation narrative is not merely supported by supply-demand mechanics, and is also the effect of the mining economy, where miners are frequent sellers of newly minted Bitcoins and market prices determine their profitability.

As the block reward cuts miners’ income into half, it is naturally in their interest for Bitcoin prices to appreciate, and often they regulate their own market selling to support favorable price action.