Bitcoin is changing hands from retail to institutions, is it too late to buy?

Bitcoin has come a long way from the dark corners of the web to corporate treasuries. While many wrote off 2017 as the year the bubble burst, it took exactly three years, a global pandemic, and rampant money printing to give the oldest digital currency the perfect setting for a comeback.

Today, as Bitcoin trades over $55,000, it has already set new highs above $60,000 and is featured on the statements of companies like Tesla, MicroStrategy, Square, and more. What does this mean for the average investor though? Is it too late to buy Bitcoin?

The answer to this question lies in a closer examination of what brought Bitcoin to the point where it is today, and whether this is the end or just the beginning of its rise to global acceptance as an alternative investment.

Bitcoin’s value comes from its scarcity, strength, and transparency

In order to assess whether Bitcoin is currently under or overvalued, one needs to identify the characteristics that give it value in the first place. Briefly, Bitcoin’s value comes from the fact that it is transparent and fair in terms of its monetary policy as well as its origin. Unlike other digital assets, Bitcoin’s founder is anonymous and has not, to date, moved any of the original coins or sold them on the market.

Secondly, Bitcoin’s network is the largest and most reliable, making it tamper-proof and nearly impossible for a single entity to manipulate its blockchain records. Finally, Bitcoin is scarce, and the fact that only 21 million Bitcoins will ever exist, makes any rise in demand have an impact on its value.

Why are institutions buying Bitcoin?

While Bitcoin’s value proposition is clear, the question many ask is why institutions are buying it, and why are they buying it now. The answer to that lies in how large institutions operate. Even though companies like Tesla, MicroStrategy, and Square are publicly investing in Bitcoin now, the motivation for such is not new, and the corporate case for Bitcoin was already being considered in 2017.

The fact that regulators and traditional institutions, like custody services, brokers and exchanges needed to catch up meant that corporations had to wait for these developments. In the past couple of years we saw regulators give Bitcoin a clean pass (it is not considered a security) and big names, including Bakkt, CME and CBOE joined the space to offer corporate solutions.

2020 presented the perfect opportunity for corporations to start looking elsewhere for stores of value as the pandemic forced policymakers to contend with the devaluation of currencies and stimulus packages, which diluted the money supply and gave Bitcoin a chance to shine. At the moment, corporations are actively accumulating Bitcoin, as is evident from Tesla’s $1.5 billion purchase and its recent decision to accept Bitcoin payments. A brief look at Bitcoin treasuries shows that Tesla is not the only one. 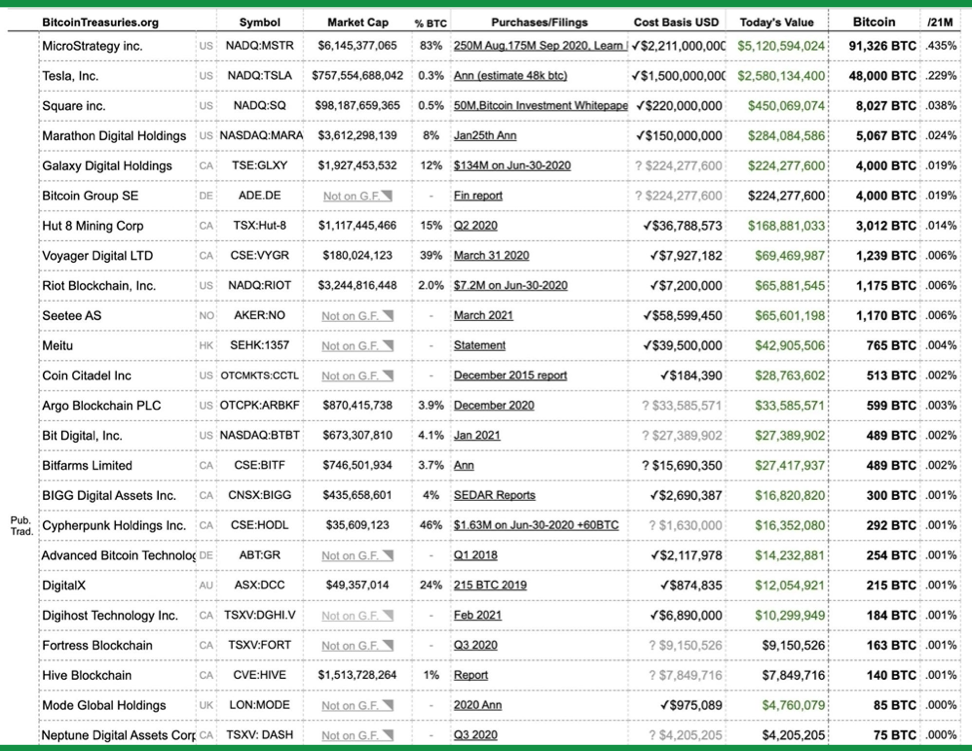 Is it too late for other investors to buy Bitcoin?

The short answer to this question is no. Given that Bitcoin is still relatively in its early stages and is being accumulated by institutions, it is reasonable to expect that this trend is just taking off. While the price of Bitcoin is likely to remain volatile, its long-term growth is evident and documented in various models, such as the stock-to-flow model, according to which Bitcoin is likely to cross the $100,000 price point this year.

That being said, with Bitcoin’s rise, the entire crypto space has come into the spotlight and there are a variety of new protocols and projects with their own use cases that are currently featured in the top digital assets. Apart from Bitcoin, many of these digital assets represent potentially profitable investment opportunities.

At BitBull Capital, we specialize in diversified, active management, as represented by our crypto hedge fund. Some of our funds’ key investments include Coinbase, Tezos, Cosmos, Polkadot, Filecoin, dfinity, Near Token, Avalanche, Synethix, Mythical Games, and more.

In order to get started, click here to schedule a free call and let us walk you through potential crypto investment strategies that suit your portfolio and risk appetite.