Unlike traditional financial markets, the crypto market is highly volatile and active 24/7, this presents unique opportunities and specific price movements, trading patterns and correlations which merit observation and understanding, particularly for actively managed crypto funds such as BitBull’s. In this article, we will discuss how a short squeeze is often responsible for propelling Bitcoin price even higher after a major jump.

A recent example of such market activity is the surge in Bitcoin price seen between April 1 and April 2, 2019, where BTC rose by over $700 as a result of several large purchases of Bitcoin, from $4105 to $4880, pushing the price up, then squeezing the shorts of other investors. In this article, we will discuss how a short squeeze is often responsible for propelling Bitcoin price even higher after a major jump.

Before we talk about short squeezes, we need to touch upon shorting or short selling as a trading strategy. Even though the crypto community promotes ‘hodling’, which is effectively going long on Bitcoin (or any other cryptocurrency), short selling is a prevalent practice and several exchanges, like Bitmex, Bitfinex, and Kraken, allow it via margin trading.

A trader who believes Bitcoin price will appreciate, simply has to buy it. But one who thinks it is going to decline has to short it (or sell it now), by borrowing it from an exchange or a broker (and pay margin interest). The idea here is that the short seller will buy back the owed Bitcoins when their price declines and keep the difference as profit.

For instance, if a short seller shorts one Bitcoin at $5,000 and the price then falls to $4,000 – he only has to buy one Bitcoin back (at the new, lower price) to cover his short and pay back the exchange, making a $1000 profit. 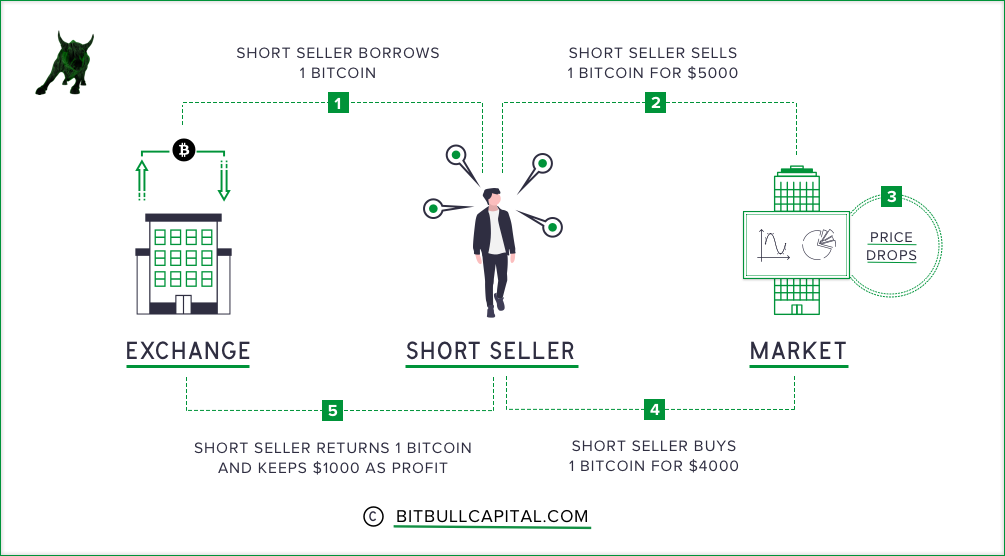 However, short selling has considerably more risks than simply buying Bitcoin for future appreciation. When you purchase a Bitcoin, your possible loss is capped at the price you paid for it, but when one shorts it, the margin for loss is virtually unlimited.

Taking our previous example, if the trader shorts Bitcoin at $5,000 but the price continues to appreciate instead of declining, he will have to pay out of pocket to cover his short and buy back one Bitcoin from the market. Hence, the more expensive it gets, the bigger his losses become.

In order to prevent such losses, short sellers have to set risk limits, and based on those, their contracts are liquidated when their margins are reached.

For example, if a lot of traders shorted Bitcoin at $5,000 with a margin of $1,000, their short liquidation price would be $6,000. This means, if Bitcoin surges to $6,000 due to any factor, all the short contracts will be liquidated (the traders will be forced to buy back every Bitcoin they shorted, at the new price of $6,000). This forced liquidation will essentially translate to even more buying momentum (after the actual surge to $6,000) and ‘squeeze’ the price higher, in what is known as a short squeeze.

Given all this, keeping tabs on market dynamics, not just regular trading but also margin trading, can help active managers stay ahead of the curve and leverage such opportunities to maximize returns. You can learn more about crypto trading strategies and market updates via our blog, or contact us to learn about our managed crypto funds.

Blockchain & Real Estate: How Tokenization May Be a Game Changer for Investors and Owners
How BitBull Returned +29% in 2018, During the Crypto Winter