Is the Ethereum Merge a Real Game Changer for the Crypto Industry? 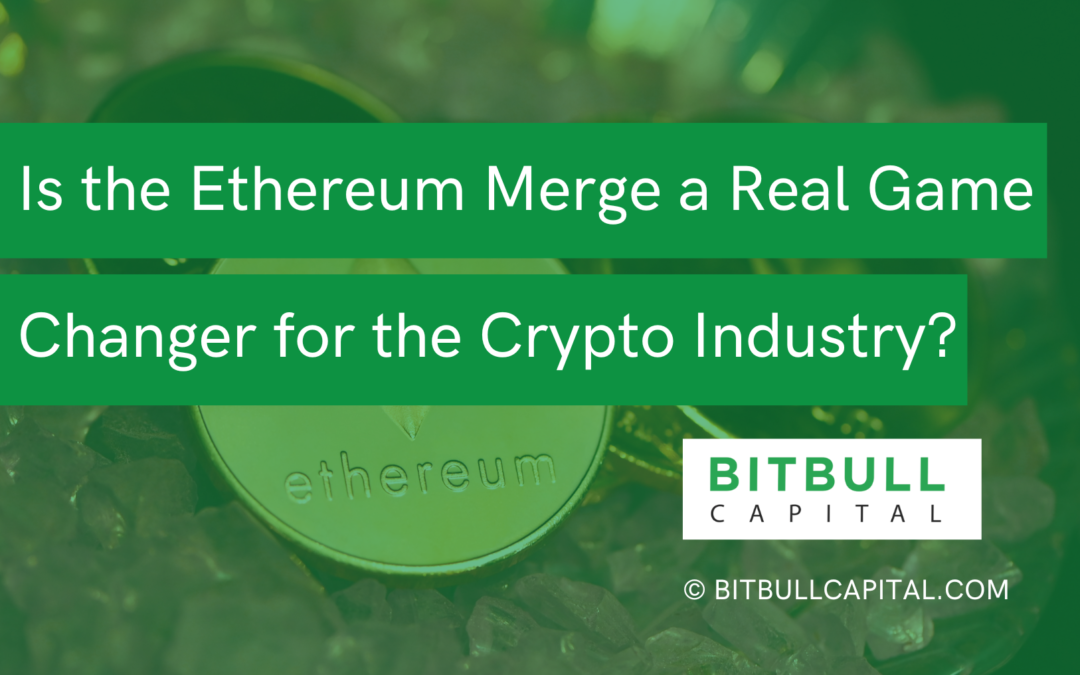 In 2022 the correlation between the Nasdaq and cryptocurrencies has been remarkably high. Interest rates have risen sharply in the first half of 2022 and financial conditions have been tightening as a consequence. This has caused a sell off in risk assets. Cryptocurrencies and innovation stocks have been hit hardest since those were the assets furthest out the risk curve.

For the second half of 2022 it looks like monetary policies will be less unfavorable for risk assets. However, blockchain technology still needs a catalyst to decouple from stock prices and start independent price discovery.

The Ethereum merge could be the catalyst needed. While the merge was postponed over and over again it appears to be finally happening. Ethereum is updating its consensus mechanism from Proof of Work to Proof of Stake. Mainstream awareness about the most important upgrade in the history of Ethereum and about Ethereum in general is still very low. 2022 could turn out to be the year when this will eventually change.

The Ethereum Merge is Scheduled to Occur in September 2022

The Beacon Chain was running in parallel to the Ethereum blockchain. However, it did not process any transactions or execute smart contract logic. During the so-called merge the execution layer is migrated from Ethereum’s Proof of Work blockchain to the Beacon Chain. In the course of this the Proof of Work mechanism will be switched off and energy intensive miners are no longer needed to operate the Ethereum blockchain.

What Changes Come Along with the Ethereum Merge?

One of the benefits of migration towards Proof of Stake is that Ethereum turns into an environmentally friendly technology with a reduction of energy consumption by more than 99.9%. This migration will leave Bitcoin as the only major cryptocurrency whose consensus mechanism is based on the energy intensive Proof of Work. This all comes at a time of soaring electricity prices and energy shortages.

From an economic perspective the reduction in issuance is a major benefit of the merge. Currently new $ETH is issued to both miners of the Proof of Work chain and stakers of the Proof of Stake based Beacon Chain. However, once the merge enters into force miners will no longer be needed and no more $ETH will be issued to them. It is estimated that the issuance of $ETH will decrease by around 90% after the implementation of the merge. Additionally, EIP-1559 continues to burn Ethereum based on the demand for blockspace on the Ethereum blockchain. Currently the demand for Ethereum blockspace and subsequently gas fees are low. The demand for Ethereum blockspace is mostly driven by NFTs and DeFi. If the demand returns only nearly to prior euphoria levels Ethereum will end up being a deflationary asset with a decreasing supply.

Price Impact of the Ethereum Merge

So far retail’s awareness around cryptocurrencies is mostly centered around Bitcoin. Search popularity on Google trends continues to be way higher for Bitcoin compared to Ethereum as can be seen in the chart below. The chart also shows that interest in Ethereum has not increased in the past months making it likely that awareness about the merge is still very low outside of the cryptocurrency bubble.

However, investors are assessing the impact of the merge differently. Typically the ratio of altcoins or Ethereum to Bitcoin decreases during a bear market as investors consolidate their holdings into Bitcoin while market conditions remain unfavorable for the industry. While this was the case for many altcoin ratios in the first half of 2022 it was not the case for Ethereum. The ETHBTC ratio suffered in early 2022 but started to recover in July in anticipation of the merge. Based on the current bearish market sentiment Ethereum is trading at unusually high levels compared to Bitcoin.

Besides Bitcoin Ethereum also massively outperformed its smart contract competitors Solana, Avalanche or Cardanov in 2022 removing any fears of Ethereum being displaced.

However, it can be assumed that a lot of the effect of the merge is not yet priced in. Many investors compare the merge to Bitcoin’s halving. In fact the effect of the merge is equivalent to three Bitcoin halving cycles that occur over the course of 12 years. After the supply reduction of Bitcoin it typically takes a few months until the impact on the price can be seen. Therefore it is reasonable to assume that a significant part of the price action accompanying a successful Ethereum merge will only be seen in the months following after the merge.

What Happened to Ethereum 2.0 and the Old Ethereum Roadmap?

Core developers and Ethereum thought leaders realized that scaling Ethereum was still many years away. Therefore in 2020 they began advocating for a roll up centric roadmap for Ethereum to provide scalability solutions in the short and mid term.

The old roadmap with Ethereum 2.0 was phased out in favor of a new roadmap consisting of 5 network upgrades that are developed in parallel. After the implementation of the merge in September 2022 four important network upgrades for Ethereum remain on the roadmap:

As Vitalik Buterin, the inventor of Ethereum, has stated all upgrades are developed in parallel. While the merge will still happen in 2022 it is unclear when the other Ethereum upgrades will enter into effect. However, it can be assumed that the merge will remain the last network upgrade in 2022 and all further improvements will occur in 2023 and beyond. Vitalik Buterin estimates that after the implementation of the merge the Ethereum roadmap is around 55% complete. Improving network scalability will remain one of the top priorities for Ethereum after the implementation of the merge.