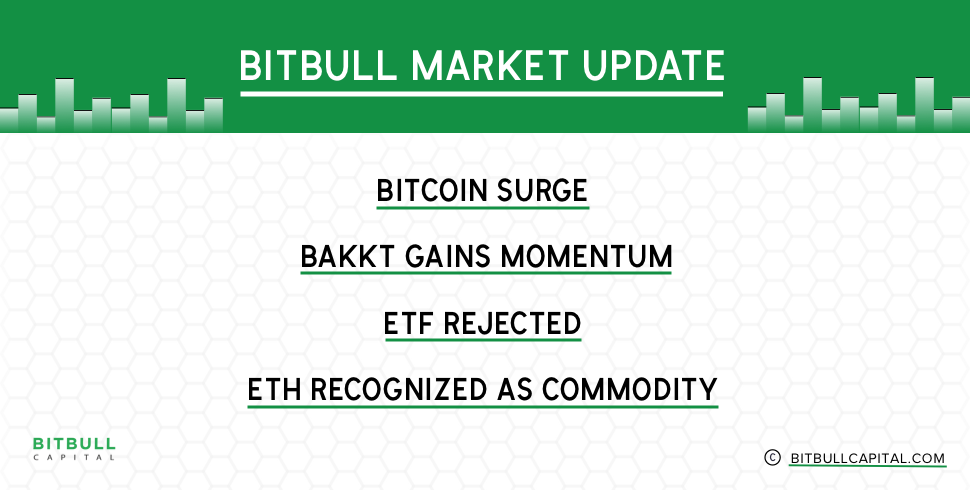 It’s been an eventful week for crypto so far, starting with Bitcoin’s modest, but positive price recovery after the major drop last week. Monday saw BTC price bounce off the support at $7,750 and cross $8,300 before taking a breather and resuming the uptrend on Wednesday to touch $8,700.

Overall, after losing 22% of its value the previous week, Bitcoin appreciated by 12% this week before meeting some resistance and is currently trading at $8,550 – a gain of 10%.

The price surge also saw volumes pick up on the newly launched Bakkt exchange, which reached a record of 224 BTC, just a day after posting a dismal 25 BTC volume.

The SEC, in its ruling, cited a lack of market transparency and prevalence of fake trading activity as the key factors behind the rejection.

On the positive side, U.S. CFTC’s chairman, Heath Tarbert, while speaking at a Yahoo Finance summit today, recognized Ether as a commodity, and stated that similar cryptocurrencies should have similar classifications, opening the door for forks such as Bitcoin Cash and Ethereum Classic to be recognized as commodities as well.

Going into the weekend, Bitcoin’s price movement remains indecisive and a drop-down to retest support levels is not off the table. While immediate resistance lies in the zone between $8,700 and $9,000, a breakdown of the support at $7,700 will expose $6,000 to the next level.