The Case for Bitcoin as a Hedge Against Hyperinflation

Earning money and preserving its value are two entirely different things. Traditional currencies, be it the US Dollar, Euro, Yen or Pound are all inflationary in nature, due to the very fact that central banks can print them at will. This means your fiat money is losing value every day as its purchasing power is reduced.

Inflation is typically countered by investment, and the goal with any investment is to make a return which is more than the going rate of inflation.

While inflation is part of economic design, in some cases external and internal forces greatly accelerate inflation, causing what is known as hyperinflation, which can render fiat currencies virtually useless, as has been the case in Zimbabwe and Venezuela.

One of the most common hedges against inflation is gold, due to its limited supply and scarcity. Even though gold is not an ideal investment, it does retain value better than fiat currencies and is fairly tradeable.

During times of economic crises, most people pull their wealth out of fiat currencies and into precious metals, to preserve its value, at least until the economy recovers.

The question is, whether Bitcoin, which was designed by Satoshi Nakamoto shortly after the 2008 economic meltdown, can serve as an effective hedge against inflation and hyperinflation.

Bitcoin as a hedge against inflation

Bitcoin shares many of the characteristics of gold, most notably that it is a scarce and limited resource. There can only ever be 21 million Bitcoins in existence and not a single coin can be created arbitrarily – this makes Bitcoin a deflationary currency, theoretically increasing its purchasing power every day.

Bitcoin also has some key advantages over gold:

However, Bitcoin’s volatility is a major factor which cannot be ignored and takes away from it as a hedge against inflation. During the start of 2017, one Bitcoin (BTC) was worth $1,000, by December 2017 it was nearly $20,000, only to drop to around $3,500 by the end of 2018. Today, in July 2019, Bitcoin is trading between $11,500 – $13,000. This price action clearly shows Bitcoin’s price instability and makes it unsuitable as a reliable store of value or hedge against regular inflation.

Countries facing hyperinflation place several restrictions on citizens and their wealth. Often their ability to purchase other currencies, such as the US Dollar, is legally limited, and they are not allowed to move wealth abroad either. In such scenarios, locals have no option but to see their wealth diminish daily as they lose purchasing power to buy even the necessities of life like food, water, and medicine.

Even though Bitcoin is not the most reliable store of wealth or hedge against inflation, it is in these countries (with hyperinflation) where it really shines. As long as there is internet access, people are able to own and move Bitcoins across borders and preserve their wealth to a much greater extent by purchasing and holding Bitcoin and other major cryptocurrencies.

The inherent properties of cryptocurrencies can certainly help combat hyperinflation, and cellphone penetration even in poor and displaced populations can be high, making crypto an especially useful solution. Initiatives by the crypto community have popped up to use this opportunity to help. Givecrypto.org, a nonprofit started by Brian Armstrong co-founder of Coinbase has raised over $4million and is currently working to create ambassador networks to distribute donated crypto primarily in Venezuela.

Today people in Venezuela or Argentina, can easily buy Bitcoins with their savings and hold them securely for future use. Even though they will be taking a chance on Bitcoin’s inherent volatility, that risk is much less than the one they face at home, where their local currency may eventually be relegated to making arts and crafts. 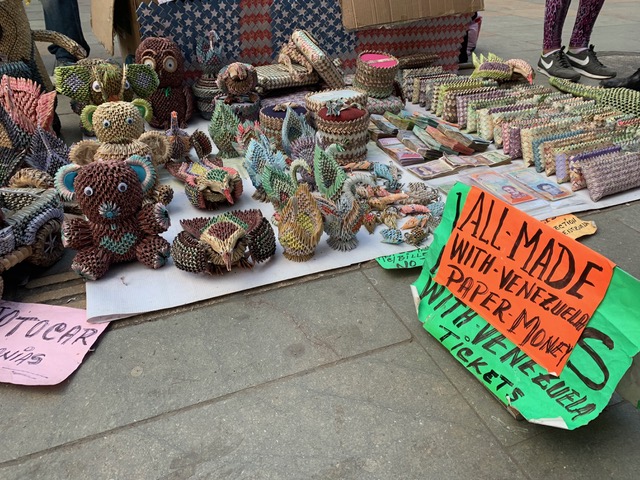 This utility and the consequent high demand is one of the reasons why Bitcoin and other cryptocurrencies are sold at a premium in countries facing economic turmoil, such as Venezuela and more recently, Argentina.

Bitcoin was originally designed to become a medium of exchange and store of value which operates beyond the purview of governments and economic policymakers, and today it serves this purpose to a fair extent, if not ideally. Moving forward, Bitcoin’s scarcity almost guarantees value appreciation, but it remains to be seen how the network and the digital asset itself matures over the coming decades, especially since the last Bitcoin is expected to be mined sometime in the year 2150.