The NFT Investing Guide for Beginners 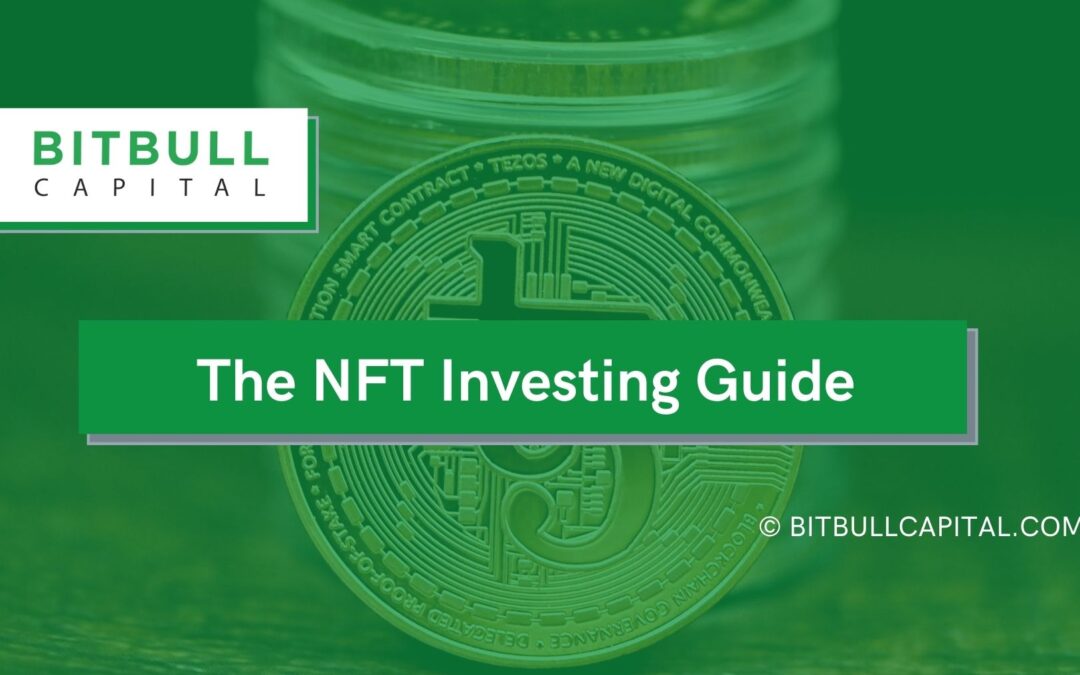 Collecting and trading NFTs (non-fungible tokens) were potentially some of 2021’s most profitable activities. Prices of popular NFTs such as Bored Apes soared 100,000% since their mint. Not long ago, NFTs were not on anyone’s radar; then suddenly the topic took social media by storm.  As the NFT market is consolidating, investors are starting to ask questions:

●  Have I missed the opportunity?

●  Are NFTs a serious investment class?

●  How can I make money with NFTs?

Here, we will look at these questions and explore NFTs as an emerging asset class within the cryptocurrency space.

NFT, or non-fungible tokens, are unique tokens issued on a blockchain. The most popular cryptocurrencies, such as $BTC, $ETH or $UNI, are all fungible – it does not matter which coin you hold, since they are all the same. The same is true for the US dollar, in the sense that every dollar is the same and provides you with the exact same value when it is used.

Alternatively, this is not true for a cinema entrance ticket, which is issued for one movie at a certain time and a specific location in the theater. Your cinema ticket is unique and different from all other cinema tickets. In the crypto space, this is called non-fungible. It is scarce, because only one token of its kind exists, which is crucial for accruing value.

In most cases, the token itself does not contain the entire value. Rather, it is the ownership that is linked to the token. An NFT, for example, might provide proof of ownership for a certain image or song. The crypto space has considerable cultural significance, since many NFTs are de facto ownership records of digital images. At the same time, the evolution of NFT collections led to the formation of NFT communities.

Where can NFTs be traded?

More than 90% of Ethereum based NFTs are traded on OpenSea. OpenSea is the by far largest NFT marketplace by volume and is backed by YCombinator and other notable Silicon Valley investors, such as Andreessen Horowitz.

While OpenSea collects fees for trading NFTs, the more significant fees incurred by traders are Ethereum gas fees. Every NFT ownership transfer must be recorded on the blockchain; therefore, gas fees apply to update the state and ownership records on the blockchain. Furthermore, NFTs are typically denominated in $ETH, and $ETH must be purchased before buying an NFT on OpenSea.

In 2021 and 2022, OpenSea evolved as the largest driver of demand for blockspace on the Ethereum Blockchain. Most blockchain native exchanges like Uniswap have issued a token to represent ownership of the exchange, but not OpenSea, which has disappointed its users.

Decentralized competitors to OpenSea exist, but the large, centralized exchanges such as Coinbase and FTX are also looking to participate in the booming NFT market. Coinbase announced the launch of an NFT marketplace and will enable credit card purchase of NFTs without requiring users to pre-purchase cryptocurrencies. Sam Bankman-Fried’s FTX exchange also recently introduced an NFT marketplace.

In late 2017, Bitcoin and other major cryptocurrencies went on a parabolic run that brought mainstream attention to the blockchain space.

NFTs were not yet a thing, aside from the CryptoKitties NFTs. CryptoKitties went viral and caused congestion on the Ethereum blockchain for the very first time. CryptoKitties were an early NFT-based game that allowed owners to breed and create new NFTs. However, there were unlimited CryptoKitties in circulation, which prevented CryptoKitty NFTs from accruing substantial value. In the end, the emergence of limited-item NFT collections created significant value for the space.

Larva Labs first implemented the idea of creating an NFT collection with a restricted number of items, and this eventually changed the NFT scene for good. Larva Labs launched the CryptoPunks collection in June 2017 with a 10,000-item limit.

While the notion of a limited collection existed in 2017, it took substantial time until the value was recognized, and Punks became more valuable. The art underlying CryptoPunks is very simple. Nevertheless, it was the first NFT collection launched, which created much of its value.

Another extremely successful NFT collection is the 10,000 Bored Apes from Bored Apes Yacht Club, which launched in April 2021. Bored Apes got its popularity from the exclusive community its members were entitled to join.

Towards the end of 2021, CryptoPunks and Bored Apes evolved as the most valuable collections. Both collections are limited to 10,000 pieces. On December 23, 2021, Bored Apes became more valuable than CryptoPunks for the very first time.

Profile pictures on social media are the most popular use case that emerged for NFTs so far. Twitter recognized this trend and implemented a feature in early 2022 that enabled users to display the legitimate ownership of their NFT through their Twitter account.

Profile picture NFTs have evolved as digital status symbols analogous to traditional status symbols like Rolex watches and sports cars. Twitter users can signal their net worth and their early acceptance of a trend others missed. Furthermore, NFT holders of a certain collection form part of a community that provides access to exclusive mints and spaces.

Gaming is a highly anticipated NFT use case that has not yet materialized. The high Ethereum gas fees make it necessary to develop gaming on Layer 2 scaling solutions, since the Ethereum base layer fees prevent the onboarding of millions of users. Layer 2 networks are still in their infancy; they only started to gain traction in 2022.

The most obvious way to gain exposure to NFTs is to purchase an item from an NFT collection. Depending on their attributes, the items in a collection are priced differently. It is helpful to be knowledgeable about the respective NFT collection to get the best value.

While ownership of one CryptoPunk is rather expensive (prices range between $200,000 and 500,000) the purchase of a stake in a CryptoPunk is an affordable option.  There are several platforms that provide fractional NFT ownership. NFT Index Funds are another investment option that track the price performance of selected NFTs.

NFTs are also very difficult to safeguard. Investing in NFTs outside centralized exchanges requires self-custody of the asset. Unfortunately, there have been numerous instances in which NFTs were stolen when their holders were not able to sufficiently protect their assets.

NFTs are traded mostly in Ethereum and are naturally correlated to other cryptocurrency assets. However, the correlation is not always very strong. NFTs have shown independent price discovery and decoupled at numerous times from the cryptocurrency blue chips, Bitcoin and Ethereum. Since it is a nascent space, the volatility of NFTs is even higher than that of established cryptocurrencies. Overall, NFTs represent an interesting addition to a diversified cryptocurrency portfolio, as long as the allocation is kept manageable.