Bitcoin, the asset, relies on its network in order to remain functional. The Bitcoin network, in turn, relies on miners who verify and batch transactions into blocks in a bid to earn block rewards. This entire process, known as the proof-of-work consensus mechanism, is what keeps the network honest, reliable and decentralized. However, given the massive amount of computing power dedicated to Bitcoin’s proof-of-work model, the network has come under increased scrutiny and is regularly criticized for its energy usage.

These energy-based criticisms can broadly be divided into two categories, those pointed at the actual energy usage and those aimed at its environmental impact. There is enough media coverage on the topic and some stories deserve investigation, especially those regarding the use of fossil fuel-powered plants. However, there are statistics and arguments to the contrary that also merit consideration.

Firstly, the actual percentage of Bitcoin’s energy usage, when compared to the global energy production, is merely 0.06% according to the Cambridge Bitcoin Energy Consumption Index. In fact when comparing it to the biggest energy usage activities, BTC pales in comparison to the total electricity spent on air conditioning, and is close to the electricity consumption of televisions in the United States.

While it can be argued that electricity used by the Bitcoin network is not as productive when compared to activities like cooling and industrial processes, similarities can be drawn between BTC and gold, and statistics show that BTC uses nearly half as much electricity as gold mining per year. 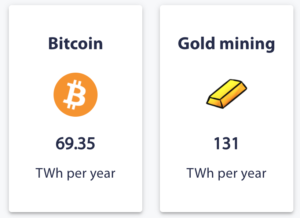 In fact, even just the electricity transmission and distribution losses in the United States per year could power the BTC network nearly 3 times over. Considering all this, it is clear that Bitcoin’s energy usage is not out of line, and actually lags behind some very prevalent activities.

The environmental impact debate, however, is a bit more complicated. It is not the network itself, but the choice of energy sources that raises concerns here. While the use of fossil fuels is not exclusive to Bitcoin mining, the activity can incentivize their usage and consequently hurt the environment. However, many proponents of the digital currency, including Cathie Wood of Ark Invest, believe that Bitcoin can spur the growth of renewable energy exploration and deployment, and potentially counter climate change.

This is an interesting argument, and one that makes sense. Unlike activities like air conditioning, Bitcoin mining is a largely digital and economically motivated activity. Large-scale miners are running actual businesses and are always seeking ways to improve their bottom lines. Since there aren’t many variables at play here, it mostly comes down to the cost of electricity they pay on an ongoing basis that has a major impact on their profitability. This dynamic inevitably incentivizes seeking cheap, long-term energy sources as well as increasing the efficiency of existing ones.

We believe, as this space matures, with regulatory clarity and adoption, Bitcoin’s proof-of-work has immense potential in terms of driving innovation and change in the energy sector.

Finally, the ongoing migration of miners from China is likely to help improve the situation over the long-term as new mining setups are likely to be more energy efficient and miners could, based on new locations, seek renewable sources. Ultimately, Bitcoin’s energy usage and its value can form a very positive feedback loop.

We are already witnessing this change, as reports from June indicate that more than half of BTC mining is now performed using green energy sources, and we expect this shift to gain momentum in the near future.